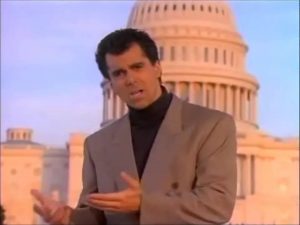 Over 200 years ago they shook off the chains
Of tyranny from Great Britain, by divine call
Citing 27 biblical violations, they wrote the declaration
Of Independence with liberty and justice for all

But something happened
Since Jefferson called the Bible the cornerstone
For American liberty then put it in our schools as a light
Or since “Give me liberty or give me death”, Patrick Henry said
Our country was founded on the Gospel of Jesus Christ

James Madison said, “We’ve staked our future on our ability
To follow the ten commandments with all our heart”
These men believed you couldn’t even call yourself an American
If you subvert the word of God

In his farewell address, Washington said, “You can’t have
National morality apart from religious principle,” and it’s true
‘Cause right now we have nearly a 150,000 kids carrying guns
To these war zones we call public schools

In the 40’s and 50’s student problems were chewing gum and talking
In the 90’s, rape and murder were the trend
The only way this nation can even hope to last this decade
Is to put God in America again

America is now number one in teen pregnancy and violent crime

Number one in illiteracy, drug use and divorce
Everyday a new holocaust of 5,000 unborn die
While pornography floods our streets like open sewers

America’s dead and dying hand is on the threshold of the church
While the spirit of Sodom and Gomorrah vex us all
When it gets to the point when people would rather come out
Of the closet than clean it, it’s the sign the Judgment of God is gonna fall

If there’s ever been a time to rise up Church it’s now
And as the blood bought saints of the living God proclaim
That it’s time to sound the alarm from the church house
To the White House and say, “We want God, in America, again”.

We need God in America, God in America again
I believe it’s tie America to stand up and proclaim
That “One nation under God” is our demand
And send this evil lifestyle back to Satan where it came from
And let the word of God revive our dying land

Because astrology won’t save you, your horoscope won’t save you
The Bible says these things are all a farce
If you’re born again you don’t need to look to the stars for your answers
‘Cause you can look to the very one who made those stars

History tells us time and time again
To live like there’s no God makes you a fool
If you wanna see kids live right, stop handing out condoms
And start handing out the word of God in schools