Is God A Democrat Or A Republican? 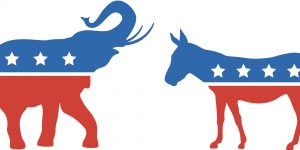 Psalm 8:3 says God created the stars with His fingers.  Considering that our local star, the sun, is 70 times the size of the Earth, that would make God very big.  Human issues are very small to Him but we will be judged by what we do.

We as believers need to keep our political party in check and be praying for the leadership of our nations.  In the United States, historically parties or groups of organized political interests came later.  The majority of the early settlers were true Christians fleeing persecution and the government trying to control them through a political “church”.  The Democrats have been considered “the party of the people” or “working class” and the Republicans the party of “business” professionals for decades.  In actuality, that is not true.

Abraham Lincoln was the US President who fought to hold the United States together when division arose about whether African slaves were people or just property of their owners.  It was the Republican party that won the right of the slaves to have true freedom not the Democrats.

In other countries in this generation, it is not as easy to differentiate between parties like we can in the United States.  Christians used to flock to the democratic party as it was the ‘people’s party’, however important social issues have changed that.

Committed Christians can no longer knowingly be a part of the democratic party as an issue as even more horrible than enslaving our fellow man has come up.  That issue is abortion.  Abortion is the killing of an unwanted  baby in the womb of a mother for convenience sake.  Abortion is murder.  Currently, 56% of women who get an abortion in the US say their reason for aborting the child is the timing is not right.  It’s just a convenience thing.  After they have murdered the child, a person feels incredible guilt for taking the life of the child.

Abortion is not new to human culture.  Innocent children have been killed for ages.  In Psalm 106:35, 37-38 we see people sacrificing their children to demons.  Evil!  What is so different from today?  God does not look lightly on killing the innocent, the ophan, or the widow.

Is God A Democrat Or Republican?
God is neither a democrat or republican but He is certainly just.  It is important that believers understand what the party the stand behind supports.  Currently, Christians in the United States can not willingly support the democratic party as their political platform is pro-abortion or ‘pro-choice’ as they describe it.  A Christian who considers themselves a democrat must realize that the blood is on them as an accessory or a supporter of murder.

If you have had an abortion, you need 1 John 1:8,9.  If you are a committed Christian, please seriously consider what you are doing as you definitely do not want to blood of millions of innocent children on your hands.

God is neither democrat, republican, or any particular nationality, however He will judge harshly those who support the murder of these children.  God demonstrated that He is a giver in John 3:16.  Who are we to take life, when God gave it?