Is Graduating From A College Or University Really Necessary? 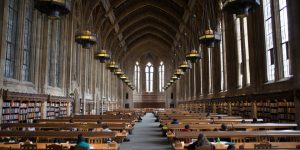 To be an appealing candidate to a company if you haven’t graduated from high school you will never be considered for any good job.  A good job is one with good pay, good benefits such as health care, retirement, and chances for advancement.  If you want to prosper as God wants you to prosper completely such as 3 John 2 says, you’ve got to get an education.  Although, getting an education in the past was tough, these days, high school is a must and university is a requirement for most positions. Most universities don’t really prepare people for real jobs so many times, getting that bachelors degree is a checkbox to say you completed something.

Despite this, there are many people who never completed university who were quite successful.  They have usually been people from families with money and exceptional people.  If you can afford to go to university go.  It is important to show a potential employer you have attained that four-year degree and keep you competitive with the other candidates who want that same great job that you want.  Then you can rely on the Lord to give you favor in the eyes of the hiring person to choose you over the others.

The Bible Take On Education

There are many great historical figures in the Bible. These are real people with real issues.  Daniel was a man who was taken in from his own country of Israel.  He was chosen because he was a good student.  In the Bible book of Daniel 6:1-3 we see that he was chosen out of the top 120 guys in his nation as a leader by the government (the King).  Of those 120, Daniel was chosen as the top three.  Daniel was educated and he loved God.  We know from Daniel 6:10 that as he showed that love by spending time with the Father ever day.

Learning what you can from the world we live in is a good thing.  We must filter what we hear or learn according to the Word of God as education, theories, and ways of teaching change but God’s Word never changes according to Isaiah 40:8.

It is alright to skip college or university.  It really depends on what you want to do.  The best way to figure that out is to know the Lord. Then be led by the Holy Spirit.  There are people who have graduated but are still pretty bad at doing their jobs.  There are others who have only graduated from High School who are very valuable resources to their companies because they do things very well.

To have a bright future as a believer, you must go to and graduate from high school.  University is a requirement for most jobs and will certainly give you more opportunity.  Many times a university degree is just a requirement for getting a higher level job but not always helpful for actually doing a job.

Universities will hopefully get better at preparing people for real jobs.  However, in the meantime, don’t limit yourself by limiting your education if you can go to college, go.  If you missed the opportunity don’t fret.  Study the things of men, but most importantly center on the things of God by studying, praying, and meditating (thinking about) the Word EVERY day.  You will never be the same and all the blessings of Deuteronomy 28 will follow after those who follow after God.