Who Is Jack Hayford? 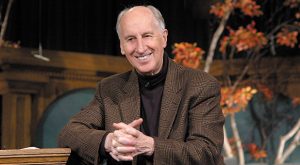 Jack Hayford is a pastor, minister, and Bible teacher from California with a long legacy of teaching and writing.  He founded and pastored many years at The Church On The Way in Van Nuys California which grew under his leadership from just 18 members.  He was also very active as Chancellor at King’s University (Formerly King’s College) which he also founded to teach people called into ministry as well as Christians who are spiritually hungry..  Hayford has been very influential in the Charismatic Renewal of the 1970s and is famous for his emphasis of Christians living by the power of the Holy Spirit.  He has taught how all believers must receive the Baptism of the Holy Spirit and his written many books and commentaries detailed the Spirit-filled believers life.

Hayford is a talented leader that not only publishes his writing but has also written songs.  His most famous song is “Majesty” which he released in 1978.  Hayford has authored more than fifty books and has composed 500 hymns and choruses.  Hayford also served four years as president of the International Church of The Foursquare and was also involved in the men’s movement known as The Promise Keepers.  He continues to have a positive influence on issues of church governance and oversight. Pastor Hayford is a accomplished write with many published works. The most famous work is the Spirit-Filled Study Bible and the re-release of New Spirit-Filled Life Study Bible.  Every committed Christian should have this study Bible in their library.

Hayford’s ministry has a lasting effect through his leadership in the Spirit-filled Church (also described as Pentecostal or Charismatic Christians) teaching believers how to hear God’s voice, pray with power, and walk in abundance that Jesus taught believers about in John 10:10.  He stands with other great Spirit-filled leaders in the church such as Oral Roberts, Kenneth Hagin, Aimee Semple McPherson, and many others hungry for the move of God and the daily power of His Holy Spirit.