Who Is Kenneth Copeland? 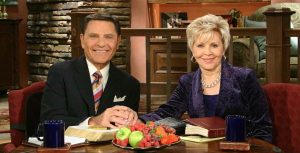 Kenneth Copeland (KC) is a very famous preacher.  Copeland is a sincere man of God who preaches a lot about faith and how to live by faith. He has said some very bold things that have challenged the beliefs some Christian religious people and the people they may influence.  Some religious people will comb through Kenneth Copeland’s messages and teaching in an effort to find something controversial in them.  One such example is Copeland has described faith in many ways, he said *faith is a force*.  Some have complained that he is saying faith is something of science fiction, when in fact Hebrews 11:1 describes faith as substance of what we are hoping for, of evidence we do not see with our physical eyes.
Kenneth Copeland describes himself before his salvation as a singer, pilot, and financial disaster in his early years as an unbeliever.  He was married once before getting saved.  He received Jesus and was changed.  Gloria was his second wife.  His ministry, the Kenneth Copeland Ministry or KCM, was founded after his time as Oral Roberts’ pilot and at Oral Roberts University.  KCM has organized thousands of meetings of various names such as the Victory Campaigns, the Believer’s Conventions held around the United States, and travels to meetings around the globe.
Copeland preaches the Bible and quotes verses frequently in every message.  He is also joined in his ministry of some 50 plus years by his wife Gloria.  His son John is the CEO of his ministry, his daughter Terrie is married to the head pastor at the church located on the KCM headquarters land near Fort Worth, Texas.
The best way to verify if someone is biblically accurate is to listen or watch a couple of their messages.  We must also ask, have they got a heart after God?  If they teach and preach things that are contrary to the Word of God, then here is something to flag.  Someone is not false prophet or some group is not a cult unless they are preaching something that is contrary to the Word of God.
Do you know Jesus?
Do you have God’s power in your daily life?
___________________________
Thanks for reading FaithPro!  You are here because you want to know the truth, and the truth of the Word will set you free!  Don’t keep the freedom to yourself!  Share with others via the buttons below.  One Word from God can change someone’s life forever.  Jesus is Lord!