Why Would Anyone Call A Christian A Protestant? Where Does That Come From? 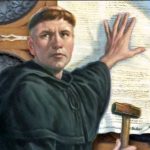 When you hear the term protestant it is usually from someone who is not familiar with Jesus Christ trying to identify a Christian.  Christian is a term used to define followers of Jesus Christ but there are many religious people who refer to themselves as ‘Christian’.  Christian is first used in  Acts 11:26 where we first hear this reference to the followers of Jesus.  Some people define Christian as someone who is “Christ like” or a “little Christ”.  Ephesians 5:1 encourages us to imitate God. Christians are to be like God, which we can only accomplish by the grace that God gives us through receiving Jesus.
For anyone knowledgeable of history and the Bible you will know that the term ‘Protestant’ is not biblical, despite being a check box on some registration forms.  In fact, it has nothing to do with Jesus or His followers.  Protestant is a label that comes from the Roman Catholic leadership.
In 1517, Catholic leader Pope Leo X announced a new round of indulgences to help build St. Peter’s Basilica. On October 31, 1517, a frustrated Catholic priest named Martin Luther (originally Luder in German) nailed a sheet of paper with 95 theses on the university’s chapel door. Though he intended these to be discussion points, the Ninety-Five Theses laid out a devastating critique of the indulgences as corrupting people’s faith. Luther had been studying the Bible and was very aware that the good news and message of Jesus Christ is that we are saved by grace, not works.  Luther also sent a copy to Catholic Archbishop Albert Albrecht of Mainz, calling on him to end the sale of indulgences, which was basically selling forgiveness of sin that the Lord Jesus already won for believers. Aided by the printing press, copies of the Ninety-Five Theses spread throughout Germany within two weeks and throughout Europe within two months.
Of course, spiritual people recognized the error of the Catholic group as it was the most powerful religious group of that time. However, religious people saw a threat to their money-making machine and their livelihood much like the religious artisan Demetrius who stirred up his fellow idol/trinket makers in Ephesus (Acts 19:24) against ‘the Way’ as the early Christians were called.  Luther had a very public fight with the Catholic top leader in Italy known as ‘The Pope’.  He was excommunicated from the Catholic church in January 1521 by Mr. Leo for his protests against the religious leadership of the politically powerful group.  Years later, people who left the Catholics with Luther later became what is known as “Lutherans” to join one of many denominations of the Church of Jesus Christ.  This time period is part of what is known historically as the “Reformation”.
Of course, the Catholic church was not the only church at the time, there were actually other churches and many true Christians in the area.  The religious hypocrites were losing their control on people due to the Word of God going directly to their hands thanks to the printing press. The Catholic religious people began calling anyone who did not agree with them, protestors or “protestants”.  Of course, there is no such thing as “protestant” in the Bible, nor did the Lord Jesus appoint any denomination.  He appointed followers of Himself and said He would build His church through those followers who recognized Him as the Messiah (the Christ).  The church is built on the Rock of Jesus as our Savior.  It is not limited to any nation, location, or people.
If you are a follower of Jesus and someone asks you if you are a ‘Protestant’ you can easily respond that you are not.  There are no protestants in heaven, only Jesus people.  Do not be offended, as the person asking either does not know Jesus, or is a member of the Roman Catholic church unknowingly using offensive language.
If you have accepted Jesus and been baptized in the Holy Spirit.  You are a Jesus person, a follower of the Way..  you are a royal priesthood, a chosen generation, a child of God.  You are a true Christian, a follower of Jesus.
If you don’t know where you would be if you were to die today, do something about it now.  You can receive Jesus here.
___________________________
Thanks for reading FaithPro!  You are here because you want to know the truth, and the truth of the Word will set you free!  Don’t keep the freedom to yourself!  Share with others via the buttons below.  One Word from God can change someone’s life forever.  Jesus is Lord!