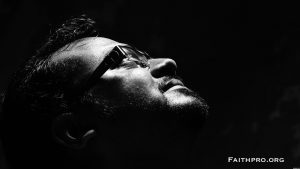 There are many religions in the world today.  Many say that religion is all going to the same place and the same way.  When I get on a highway, do they all take me to New York?  No, of course not.  People get funny when they talk about religion.  You can read about How God Sees Religion here.  In short, God hates religion as religion doesn’t lead you to God, it leads you away from Him.

In English we have the word, “theology”.  Anything with “ology” on the end of the word means ‘the study of’.  Using that understanding, we can see that biology has a meaning, ‘bio’ meaning ‘life’ and ‘ology’, ‘the study of’.  Biology is the study of life.  Theology is ‘the study of God’.  When we talk about a theist, that means someone who believes in God.  When you add an “a” before the word it makes the word negative.  An atheist is someone who does not believe in God.  However, there is confusion.  There are actually two words applied to this type of person.  Atheist is someone who does not believe that God exists.  There is another word which is ‘agnostic’.  An agnostic is a person who is not sure if God exists and doesn’t really care.  An atheist is someone who has concluded in their mind, without a shadow of a doubt to themselves, that God does not exist.

In the world around us, we have many religious people who believe in some sort of god.  People praying to nature, idols, or maybe just believing in some force.  However, the majority of those who don’t know God are really just agnostics because they don’t believe in God, nor do they really care.  That will be their demise, that will affect them for eternity.  An agnostic doesn’t care if God exists or not, while a true atheist is someone who has decided that they know God does not exist.  How can they know?

How Can You Know God Does Not Exist?

Many atheists act as though they are above those of us who believe in God and know Him.  They ask, “How can you know God exists?”  For a Christian who knows the Bible and its author, the answer is simple, we talk with Him every day, and He talks back to us.  Conversely, how can someone who calls themselves an atheist really know, beyond a shadow of a doubt, that God does NOT exist?  It takes some serious believing to think that the atheist mind is all knowing.  A person who loves science knows that science is all about recreating the same situation to test and evaluate.  How can a person honestly say they understand all things?  They cannot recreate the earth can they?  From physics we know from the laws of thermodynamics that all things go from order to disorder.  People go from old to young.  Things get old, break, and fall apart.. so do people.  How could things go from disorder (non-existence) to order?

Atheism Is A Religion

The majority of the unbelieving world are agnostics.  Sadly, those who call themselves atheists are not only wrong, they are deceived.  It takes more “faith” to somehow conclude that God does not exist than that He does.  How do they know all?  Romans 1:22 summarizes it simply, “professing to be wise, they became fools”.  There is no logical or scientific way that someone can prove that God does not exist.  Atheism is a religion, as the dictionary defines religion as a ‘set of beliefs’ or a ‘belief system’.

The Challenge For True Science And Logic

Built into every human being is a desire to know why they exist and to know God.  Although it happens at different ages with different youth (usually girls before boys), all of us come to the point where we wonder why we exist.  The Bible is filled with verses such as Psalm 119:20, Isaiah 26:9, John 7:37, John 6:35, and many others that illustrate our built in knowing that God exists.  We can either suppress and try to bury the desire to know our Creator, or we can acknowledge it and say, “God, are you there?  I want to know you. What do I do?”.  Then watch what happens when you talk to God. Know Jesus TODAY. Ready for the next step?  Get God’s power in your life now.