What Was The Brownsville Revival? Pensacola Outpouring? 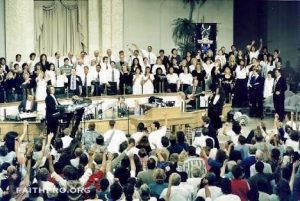 Throughout history there have been times where generations of sought God more than the generations of people before or after them. Many times this manifests in a revival, a pouring out of God’s Spirit on people that are hungry for more of God and His presence in their lives. In June 1995, Father’s Day, everything came together for a revival of God’s people in a small town in the Florida panhandle. A praying church was visited by a bold evangelist, Steve Hill who also was hungry to see the move of God.

Brownsville Assembly of God (AG) church in Pensacola Florida (USA) was praying for more of God’s presence. Some say it was a year or two, of people becoming more and more hungry for the presence of God. Brownsville Assembly was pastored by John Kilpatrick. Kilpatrick had invited Steve Hill, a former drug addict turned licensed minister, (saved under the ministry of Teen Challenge) to preach at the church on Sunday.

What started as a Sunday engagement transformed to several years of daily worship services. Worship was led by worship director Lindell Cooley who had just moved to Pensacola to help lead from a music career in Nashville. The power of God fell on the people that Sunday as people were called to the front to seek God.

Over the 5 years of Tuesday through Sunday meetings from 1995 to 2000, 200,000+ people accepted Jesus. Witches were delivered from satanic power, homosexuals were freed from sexual sin, gang members were freed, drug/alcohol addicts were delivered from addiction. There was so much physical healing of people of sickness and disease as people sought God and brought others who needed the touch of God.  Pastor Spencer Patrick Visited from Japan three times with his family commenting, “I have never sensed the power and presence of God so powerfully anywhere more than at The Brownsville Revival”. Of the 250 AG Japan churches, fifteen pastors who participated in the revival all carried that spiritual revival fire home sparking revival in Japan Pastors and ministers from many denominations and even outside groups such as Catholics and Mormons even came with many changed forever. Believers came from Europe, South America, Asia, and Africa to experience the revival first hand. They were not disappointed.

Confusion And Critics Of Revival
The Brownsville revival was not without it’s critics. A Bible school was created called BRSM (Brownsville Revival School of Ministry) to focus the revival fire in the hearts of the people and spreading it globally. It was a wise move. However, Michael Brown, who refers to himself as Dr. Michael S. Brown, came later and was given management authority over the school. He later caused division and conflict with the church leadership and branched off to create his own Bible school breaking the unity that had developed over the years of revival. This split hurt the church.

Other pastors (including some AG pastors around the US), evangelical leaders in other Christian denominations criticized the Pensacola Revival as being people acting out in flesh, not of God, or even demonic. Despite the mistakes of the leadership at the church, the Brownsville Revival really drew the line between those who wanted more of God, and those religious people who were not open to the move of God or just petty. Others came to the revival meetings to get ‘glory’ as a preacher, singer, or author through the exposure this they thought this international movement would bring them.

Not Perfect, But Glorious
The Pensacola Outpouring of the Holy Spirit was amazing. The leadership was not perfect and certainly could have better filtered who was given the microphone, but their work will always be remembered. Conservatively, hundreds of thousands of people’s lives were changed and people were able to develop deeper relationships with God through the revival fire that spread in the hearts of those that were hungry for more of God.

Evangelist Steve Hill, speaking against God wanting to financially bless people, said “God isn’t going to give someone in Africa a Cadillac” (expensive car) Showing he didn’t understand prosperity and had a bit of Dark Ages Mentality teaching to be freed from. However, Hill preached thousands of creative and original messages that brought people into relationships with God and he must be commended. Lindell Cooley led some of the most amazing worship sessions of our generation and built up an amazing music program and produced several excellent CDs. John Kilpatrick also showed a signs of DAM saying that falling off the roof of his house was ‘God’s will’ but despite that, presided over and managed one of the greatest spiritual outpourings of our time.

Conclusions on Revival
The Brownsville Revival, or Pensacola Outpouring, showed that despite our issues, God can use anyone, anywhere, anytime to change their world with the Gospel of Jesus Christ. It’s all about people who are willing and hungry for Him.

We learn that self-promoting people should not easily be allowed to lead, that prayer is key, worship brings us into God’s presence, music is essential to our worship experience, and that we must draw near to God if we’re to draw near to them. The Pensacola Outpouring sparked revival around the world that changed uncountable lives and we are forever indebted to Steve Hill, Lindell Cooley, John Kilpatrick and all the volunteers at Brownsville Assembly of God Church for opening the windows of heaven to us. We will never be the same.