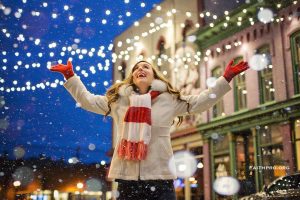 No.  Jesus Christ was not born on Christmas Day, which has been accepted as modern day of 25 December each year.  (You can learn more about Jesus here).
Judging from the when the shepherds were in the fields, the timing of the star, and other factors, we can see get a better idea of when Jesus was born.  The Bible does not say specifically, but you can triangulate based on the birth of John the Baptist, Zacharias time in the temple, and other factors.  Christmas is a wonderful time of the year to remember Jesus the Messiah, the Savior of the world. Christmas is really only significant for those who believe and trust Him. Believers can receive the peace on the earth that He brought.
In Luke 2:7-8, we see the shepherds were in the field watching there sheep at night. December in Israel is cold and a bit wet.  The shepherds would have sheltered in December not been in an open field.  Most students of the Bible, scholars, and preachers tend to think Jesus was born in the Fall.  September is the most agreed upon date.
Why December 25th?
Rome accepted Christianity and made it their “religion”.  However, many unbiblical practices still exist in the Roman church today (read about the Catholic religion and Christians here).  Opinions abound but some say the Romans had a non-Christian holiday in December which included a tradition of giving gifts.  Christmas day being placed on December 25th was just a day of convenience.  Christmas day was not observed in Rome until about 300 years after the resurrection of Jesus, the Savior of the world.
The Lord Jesus changed the earth and all of humankind forever.  Nothing can deny His birth or His resurrection.  He may not have been born on Christmas Day but that shouldn’t stop you from sharing the love of God with someone who doesn’t know God. Merry Christmas!
Do you know Jesus?
Do you have God’s power in your daily life?
___________________________
Thanks for reading FaithPro!  You are here because you want to know the truth, and the truth of the Word will set you free!  Don’t keep the freedom to yourself!  Share with others via the buttons below.  One Word from God can change someone’s life forever.  Jesus is Lord!