Do Homosexuals Go To Heaven Or Hell? 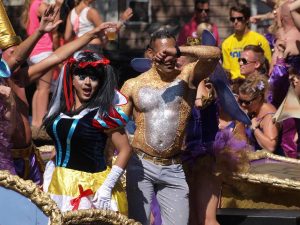 The Bible is the world’s most amazing book.  Over the generations dictators, persecutors and others have tried both quietly as well as violently to put down, destroy, and completely eliminate this supernatural book.  However, it’s impossible to snuff out God’s Word that according to 2 Timothy 3:17, was penned by believers inspired by the Holy Spirit as these believers wrote the Word of God down.

Although sexual sin has nearly always been looked down in both secular and Judeo-Christian based societies, there are times when sexual sin runs rampant. People will become more and more self centered it’s revealed in 2 Timothy 3:2. History tends to repeat itself.  Societies that are successful grow and empires are built.  When the morals begin to decline, so does that society.  Many lost cities lay waste attesting to that fact.

God’s Take On Homosexual In The Old Testament

The Bible is against sin. Sin separates us from God according to Isaiah 59:2.  However, sexual sin is sinning against your own self.  It will separate you from God, His Kingdom, and Heaven forever if you go with what the Bible says.  If you go with what people say you would believe, “Go with how you feel”, “You were born with those homosexual desires”, “You were born that way”, “God loves you how you are” and many other worldly excuses.  These are all lies.

What Does the New Testament Say?

In the Old Testament, it is well established that the Word of God pronounces the death penalty for homosexual activity.  The Old Testament shows us life of both of the lost, and those who love God.  Some misinterpret the Old Testament saying the whole Bible is filled with violence and depravity.  These people don’t know God nor the Bible as evidenced by their comments.  Some get confused when they see what life without God’s grace is like without the resurrection of Jesus.  Jesus the Messiah shows us in the New Testament God is love and He created us to love.  Loving Him back is our choice.  Those who love God are the children of God according to 1 John 5:2,3.  It is imperative that you understand the context of something if you want to understand anything in life.  Love is the basis as to why we have live.  But beyond God’s love in the Christian life, there is holiness, prosperity, healing, helping your society, building the Church of Jesus Christ and so many other things.  What does the New Testament say about homosexuality?

How The Bible Places The Homosexual

Romans 1:26-28 talks about homosexual sex among men as well as women.  It says homosexuality comes from a depraved mind, is unnatural, and carries a penalty.  The body is certainly not designed for it. Jude 1:5-7 tells us that the cities of Sodom and Gomorrah were destroyed by God due to their homosexual sin.  That destruction is eternal fire. Where is eternal fire?  Hell of course.

Homosexuals are grouped together with liars, perjurers, murderers of family members, the profane and the unholy in 1 Timothy 1:8-11.  Paul tells Timothy to avoid these people as they do not have sound doctrine.  Sexual immorality has been around since the beginning.  It’s not just homosexual, but sexual intercourse with someone that you are not married to has been a problem.  It was a problem in the city of Corinth.  In 1 Corinthians 7:2, it is spelled out clearly.  To avoid sexual temptation and immorality that separates you from God, a man should only have intercourse with his wife, and a wife should only have sex with her husband.

The Lord Jesus’ Teaching On Sex

Jesus teaches us in Mark 10:6-9, that God created us male and female for a reason.  Sexual intimacy is a God’s beautiful design for a husband and wife.  He says specifically in Mark 10:8 that when a man and woman’s body come together, their flesh becomes one flesh.  Sexual intercourse is a physical act, but it is also spiritual.  Two people become one.  What is happening when two men put things where they don’t belong? According to Jesus Christ, there is some type of union going on in sex.   Generally, just because something might taste good, doesn’t mean you should eat it.  It could kill you. It is the same for how you care for your body.

Our bodies are not just the housing of our spirits and souls (remember you are a three part being here).  Sin is missing the mark you can read here.  But sexual sin is weighted heavier. In fact, in 1 Corinthians 6:17-20 proclaims that sexual sin is not just sin, it’s sin against your own body with eternal consequences.  If you love God, you must take care of your body, as your body is the temple of the Holy Spirit. Notice it says temple, not a shed in the back lot somewhere.  The more you sin, the further you go from God.

Do Homosexuals Go To Heaven Or Hell?

When you read the back of the book for any story, you can ascertain the conclusion.  Some books are so boring you have to do that. The Word of God is living and active according to Hebrews 4:12 and it judges us and speaks to us as we read.  When you go to the back of the Bible you will find Revelations and see God’s plan for mankind.  In Revelations 21:6-8, yet again God lumps sexual sin with unbelievers and says they will all be thrown into eternal fire.  That same eternal hell fire that we talked about in Jude 1:5-7.

If you are in a homosexual lifestyle, you must seriously consider what you are doing.  It is a decision of life or eternal fire.  God loves you so much but the day is coming when we will all be judged for what we do while we are in our bodies.  You most chose today what to do because tomorrow may be too late.   Some say Christians hate homosexuals, you can read here, but that is not true.  Bible believing Christians are the ones that want to help you be free. The most important thing is that you choose now. Know Jesus TODAY.  Ask Him directly what He thinks about your life.

But don’t just stop there.  Be filled with His power by receiving the baptism of the Holy Spirit right now.