What Is The Prosperity Gospel? Is It Biblical? 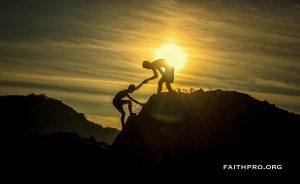 Prosperity is a fantastic word.  It gives the impression of fullness, having all that you need, or even being rich.  Recently, we’ve heard some negative comments about something called “Prosperity” or “The Prosperity Gospel”.  Where does this come from?

Although the origin is unclear, the nuiance “Prosperity Gospel” is very similar to why some people have labeled Christians “Protestant”, it is a negative. (You and read “Why Would a Christian Be Called A Protestant?” here).  The “Prosperity Gospel” is meant to be derogatory term for Christians who believe that the Father God wants His people blessed completely; physically, spiritually, and financially.  A quick survey of the word ‘prosper’, or ‘prosperity’ with your NKJV Bible concordance will reveal the truth about the topic.  God wants His people blessed so that they can be a blessing.  It is both Old Testament, and New Testament. Blessed people can be a blessing, struggling people struggle.  God does not want you to struggle.

We read in 2 Corinthians 4:4 have the god of this world, that’s satan and the defeated forces of hell, has blinded the people of this world.  Those people are not limited to people who have never heard the Name of Jesus.  There are people who profess to be Christian but yet label people that believe that God wants them to prosper as cults.  Are Christians that believe that God wants to bless them really in error?

If people who believe God wants them blessed are prosperity gospel, what are those so vehemently against them?  They are poverty teachers!  They teach the “Poverty Gospel”, AKA (also known as) the Dark Ages Mentality or DAM.  DAM is satan’s way of disarming and immobilizing the church from the Great Commission Jesus gave us all in Matthew 28:18-20.

A read of the Old Testament shows the Israeli people (AKA Jews, Hebrews, Children of Abraham) and how after they got a king, the country went closer to God or away from God based on the godliness and justice of that King at the time.  We may think those poor silly people, however the church has gone back and forth in its zeal for God the same way.  God wants us to be hot or cold in our desire for Him.  Revelations 3:16 talks about how God will reject, “spit out”, those churches that are luke-warm. Since that founding of the church by the Holy Spirit in the second chapter of Acts, we have seen the church go hot and cold.

Being a Christian is not something you inherit from your parents like a religion.  Religion is useless tradition that is passed down from generation to generation that doesn’t lead you to God.  Real Christianity is a relationship with the Most High God.  It is something YOU must personally do each day.  Check out the “5 Things A Christian Must Do To Be Strong” here.

The church over the generations has been hot and cold. The spiritual health of the church comes down to the people, each individual. Are you hot for Jesus?

Back To The Word Of God

In the 1930s and 1940s, there were good churches in the United States of America as it was a Christian nation, but the ugly head of the Poverty Gospel or DAM was limited most Christians. People believed that whatever happened to them was God’s will, that sickness came from God, and the poverty was next to godliness.  This poverty teaching was paralyzing the church and the people.

People began to question this teaching and reading their Bibles for themselves.   They rediscovered Isaiah 53:3-5 that Jesus had died for not only spiritual salvation but physical healing and the Healing Revivals broke out in America.  Out of the spiritually dead denominations famous Bible teachers broke from DAM.  Many ministers rose up like Oral Roberts who led healing tent revivals nationwide and hundreds of thousands of people accepted Jesus were healed.  It was just like Jesus did again! People discovered John 14:12 where Jesus promised that we would do greater works than He did on the earth. Wow!  He healed the sick, cast out demons, raised the dead, and even walked on a lake!  He promised us greater by His grace and our faith.

From the Baptists arose Rev. Kenneth Hagin as well as Rev. John Osteen. Hagin fulfilled his life as God told him to “teach my people faith”. These men were ejected from their denominations because they began to prioritize what they read in their Bibles over the traditions of their church denominations.  God was also working in the lives of people outside of the church denominations.

God moved on the life of a divorced and financially messed up singer and part time pilot, Kenneth Copeland.  A revival for the preaching of the Word of God uncompromised by tradition had broken out.  This idea that you could have whatever you said, believed for, and did not doubt about came to be known as the Word of Faith movement.  The Word of Faith Movement has also be viciously attacked by people that didn’t understand what God was doing in breaking His people free from poverty, sin, and death.

Not Perfect, But Righteous And Growing

No group of believers is perfect, the cross was originally capital punishment but the empty cross is now a sign of the victory Jesus won for all those who believe.  Similarly, the term prosperity gospel was meant to demean and criticize.  People have abused the Biblical concepts of giving, healing, and faith.  But people who see God’s prosperity on their lives have not forgotten about how Ephesians 2:8,9 says all we have is by grace that we attain through our personal faith in Him. The choice of abundance or lack really comes down to you.  Do you want to go with the prosperity that Jesus teaches, or the poverty that tradition teaches?  The choice is yours.